January can be cold and dark in Aspen, and so it was when I said goodbye to my gallery for the last time 7 years ago.  I had been there 19 years,  I knew I would miss it, the wonderful collectors, meeting new people, helping them find art they would love.  Simply put, it was time.  But in a quiet way, I knew I would be back, some day in a different experience.  I can never do the same thing twice, I’m just built that way.

So when artist, Nancy Noel contacted me in early August about running her new gallery, I had mixed feelings, not realizing I was ready to come back to directing a gallery. I knew she needed a director, I had been contact by no fewer than three different acquaintances to this fact. And apparently, several people had given her my name as well. I wasn’t really thinking of running a gallery again, not really. But life does present surprises and I do love surprises. 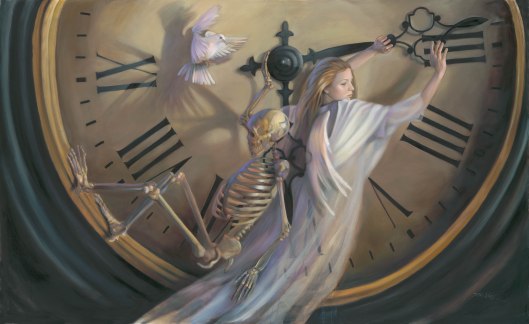 Nancy and I met on the Saturday before the Monday she was planning to return to her home in Indiana. I met with her mostly out of curiosity. Nancy and her two sons sort of interviewed me. I say sort of, because I was never asked for a resume or anything like that. We just spoke about her new gallery and what I might suggest. The more we spoke, the more intrigued I became. It was clear the gallery needed a director and the director need a gallery. We met again on Sunday evening; I suspect both of us had already decided what we would do. And I started the next day.

In every way this was going to be a different gallery experience. N.A. Noel Gallery carries only Nancy’s work. This is new for me. There are many successful one person galleries in the world, but it requires a different approach. I’m used to presenting various one-person exhibitions and finding new artists and promoting their art and career.  Nancy’s career is well established. She also paints from a unique vantage point, driven only by her spiritual guides. Nancy might paint an angel one day, and an Amish girl the next, or an enormous clock laden with crows the next. Each has a rich story to tell. 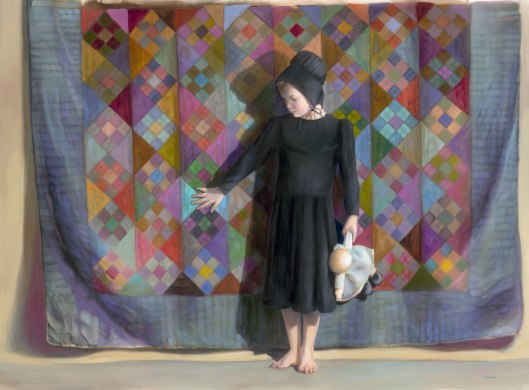 Nancy’s skill with a brush is unquestionable and you can feel the emotional passion behind each stroke. This is the work of an artist driven to express what is welling up in her soul. Throughout her career she has drawn spectacular collectors to her work, people like Oprah Winfrey, Robert Redford and Nelson Mandela. But more importantly, her work is passionate.  In the short time I’ve been running the gallery, I’ve seen viewers become overwhelmed with emotion, some crying, others expressing long buried stories about loved ones. She calls her gallery in Indiana a sanctuary. I think that’s the right word here too. Nancy’s work draws out those deeply buried feeling locked inside each of us.

I was also intrigued by Nancy’s personal story. She is modest and it takes some tugging, but eventually some of her story came out. She is passionate about her work with children, animals and the planet. And she does something about it. Nancy has built a preschool in Kenya, helping hundreds of children learn and get basic health care. It is a great success story, which touched me deeply and helped me make my decision to work with someone this compassionate.

Everything about the Aspen gallery is unique, the art, the artist, the collectors, the way we present the work, the way viewers approach the art. All of it is different. I love to learn and I love the expansive experience it offers. For example, last week we invited the Tibetan Monks of Gadan Shartse to do a blessing ceremony in the gallery. After an hour of chanting and prayer, the room glowed with spiritual light. Not exactly your typical art gallery, right? Good, because I don’t want ordinary, I want extraordinary.

When you are visiting Aspen, please stop in and say hello. I’m glad to be directing again and honored to be presenting art that touches people’s souls in a magnificent gallery.

Sometimes an idea builds inside like a kind of spiritual pressure, threatening to overwhelm the holder, even consume him. This happened to me about ten years ago. I had been writing short stories over the past year. There was no thought to what they might be used for or why I was writing them, just when they came up, I would commit them to paper. It was only recently that I even understood their purpose, and their power in my life.

Each story had a single color as its title. The first was Gray, the Kafkaesque tale of a man lost in a featureless city. Another was Yellow, about an antique’s dealer consumed slowly each night by a dead cat representing his contradictory life.

The story that began to overwhelm me, I later called Black. It started as only a seed of a feeling, a bit of undefined anxiety. I would wake at night with a deep, unexplainable fear. Everything was going well in my life and I had no reason to feel this way. I pushed it aside, ignoring it as just general anxiety about life. But it grew stronger until it began to consume me, holding a kind of opaque fabric in front of my vision.

I lost quite a bit of sleep, lying there, desperately trying to push the horrible feelings away, running from this undefinable dark fog. Out of desperation on the third night, I got up, my stomach in a deeply clenched knot and sat in front of my computer and began to write. Without thinking about it, the words began to pour out of my fingers and instead of feeling relief and peace, the way I usually do when I sit down to write, the fear grew worse. I realized there was no way around this feeling, that the only way out, was through the blackness. I was terrified.

With a deep breath, I dove into the bleak feeling and for the first time, touched it. The best I can describe it, was like a kind of river flowing beneath the surface of my life, a river of unexplored pain. I dipped my hand into that river, touching its icy thickness. The fear and anxiety only grew worse, and I knew what I must do in that moment. I had to jump in.

The story began to flow like nothing else I had ever written before, nothing related to my life, as if I were a completely different person releasing this horrible and dark crime that had been eating at me, consuming me with guilt until I couldn’t bear it anymore.

The entire story came out that night, in one marathon sitting. And when I laid done the final period I was free. The fear had left me, replaced with a deep sense of gratitude and wonder at life. I had dove through that river of pain and had been cleansed by its fire, rising up on the other side a different, better person.

I’ve put the short story online here, if you would like to read it. It is surreal and personal, without any reference in my life. I read it now, still wondering where it can from, or why I wrote it, not really sure what it means. I only know that I had to write it, had to release it, or would have been consumed by it.

I think we misunderstand fear, shying away from it, avoiding the pain it represents. And when that suggests bodily injury, that’s probably wise, a mechanism for keeping us safe, built into our DNA. But there is another kind of fear, that which we need to embrace. It holds a deep kind of meaning on the other side of its invisible veil; we must leap the chasm with only our faith to keep us aloft. And on the other side is peace, growth, understanding, and maybe if we are lucky, a bit of wisdom.